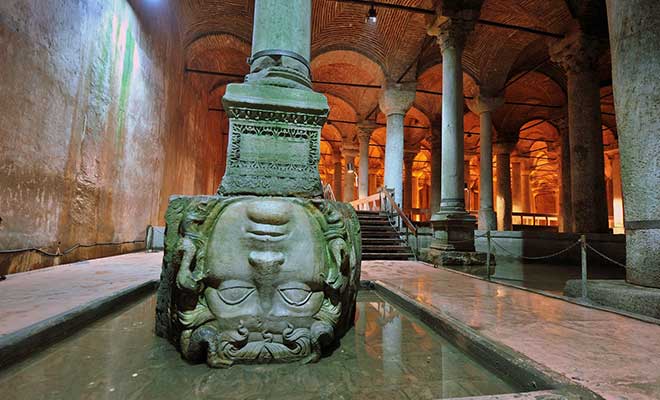 Istanbul, which is a city of history and culture, offers many attractions to see. Once you take a step into this city, you encounter many historical sites, mosques, churches and museums. How about making an Istanbul tour by taking advantage of the car rental Istanbul opportunities in this city that is so big and rich that it would take more than one day to see it? Today’s destination of Places to visit in Istanbul is the Basilica Cistern. As the Yolcu360 team, we prepared for you a detailed travel guide about Where is the Basilica Cistern? / Basilica Cistern Entrance Fee.

Now it’s your turn to visit it with pleasure.

Where is the Basilica Cistern?

The Cistern was built by Byzantine Emperor Justinian I in 532 after Christ. The reason why the cistern was built was to respond to the palace’s water need. 7,000 slaves worked during the construction of the cistern. Well, do you wonder how they carried water into the cistern after building it? Let us inform you on this matter right away. The water need of the cistern was met through two arches that stretched from Eğrikapı in the Belgrad Forest to Taksim. One of the arches was 971 meters long while the other one was 116 meters. The cistern was used actively until the 15th century. When the cistern came under the control of the Ottoman Empire in 1453, it intended purpose changed. It was used to water the gardens of Topkapı Palace. Yet, this lasted only shortly. The Ottoman Empire built the water system, so the cistern became unnecessary.

Dutch P.Gyllius who came to Istanbul in the 16th century to conduct researches on Byzantine, rediscovered the cistern and introduced it to the western world. The researcher’s depiction of the cistern in his travel book drew even more interest. The Basilica Cistern that became the center of interest in the West, was restored during the periods of Ahmed III and Abdulhamid II.

Features of the Basilica Cistern

It is called the Basilica Cistern because previously there was an old religious structure in its place. The cistern is 140 meters long and 70 meters wide. It has an area of 9,800 square meters, which enables it to reserve 100,000 tons of water. There is a stone staircase of 53 steps inside. With these stairs, it is possible to enter the base of the cistern. Within the cistern, there are 336 columns and each one of them is at 4.80 m intervals from one another. The columns within the structure are composed of 12 rows, with 28 columns each. One of the most interesting parts of the cistern are the Medusa heads which are used as supports under two columns. The Medusa heads, the origin and sate of which remain unknown, are still a mystery.

There is a story about the Medusa heads. Accordingly, Medusa had black eyes and long hair. In ancient times, Medusa was among the most beautiful women. She was so beautiful that the son of Zeus, the demigod Perseus, fell in love with her. Yet, Athena who was rather jealous, cursed Medusa for life. Beautiful Medusa’s hairs turned into snakes, which made every man turn into stone when he looked at her. Another interesting part of the Basilica Cistern is the Crying column which has patterns in the form of tears. According to hearsay, these tears represented the slaves that died during the construction of the cistern.

The Basilica Cistern is open during the week and the weekend between the hours 09:00 am to 5:30 pm. Only during religious holidays it opens at 1:00 pm.

Please note that Istanbul Museum Pass is not valid for this place since the Basilica Cistern is not under the administration of the Ministry of Culture. Finally, if you want to discover amazing Basilica Cistern, we offer you to use car rental Istanbul Airport alternatives on Yolcu360.com. It’s so easy to find all of the available car rental Istanbul alternatives and compare them online.

What To Eat In Adana? | The First Timer’s Guide To Eating In Adana


Error: API requests are being delayed for this account. New posts will not be retrieved.